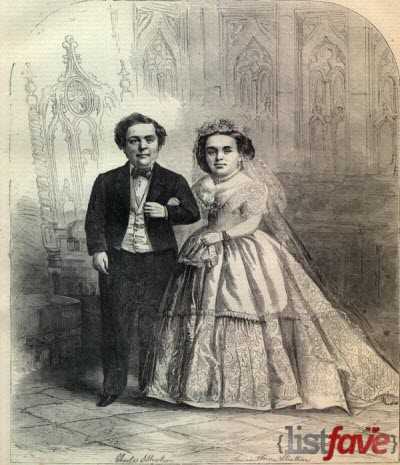 In 1843, P.T. Barnum began exhibiting General Tom Thumb or Charles Stratton in England when he was only eleven years old. In the meantime, Lavinia Warren had begun traveling in other show run by her uncle. When Warren joined P.T. Barnum’s show; much to Barnum’s delight, Stratton became romantically interested in her. In 1863, the diminutive newlyweds had a wedding reception in White House, hosted by Abraham Lincoln himself. The couple gained genuine celebrity status and crowds swelled wherever they go. After General Tom Thumb died in 1883, Lavinia Warren remarried to Count Primo Magri, another little person performer; but unfortunately her stars and the fanfare for freak show had long since faded.