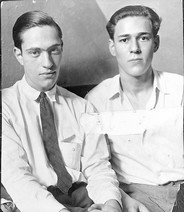 Nathan Leopold and Richard Loeb were two law students from wealthy families, who were convicted for murder and kidnapping. They spent a few months preparing for a “perfect crime”. On May 1924, the couple kidnapped and murdered Loeb’s neighbor, Bobby Franks. To make identification impossible, they poured hydrochloric acid on the body. However, a pair of glasses found near the crime scene helped police to identify the real murderers. Both were sentenced to life imprisonment and the case became a great inspiration for many films, novels and plays.