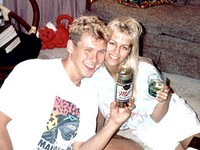 Karla Leanne Homolka and Paul Bernardo were serial killers who attracted public attention in the early1990’s. Homolka was sentenced for the murder of two girls, while Bernardo was sentenced into life imprisonment for the murder of three girls (including Homolka’s sister) and dozens cases of sexual abuse. In return for her full testimony, Homolka’s sentence was reduced to 12 years in prison.
During the investigation, Homolka revealed that she was frequently abused and became an unwilling accomplice for the killing spree. Homolka has been released from prison and currently married to Thierry Bordelais.