1. Butch Cassidy and The Sundance Kid 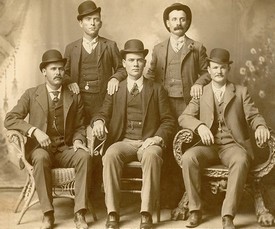 Butch Cassidy and the Sundance Kid were responsible for numerous murders and robberies. Butch Cassidy’s Wild Bunch typically split up following a successful robbery and later reunited at a specified location. During a massive man hunt, the group reportedly fled to South America only to be wiped out during a shootout with the Bolivian cavalry. Laura Bullion was the last known surviving member of the Wild Bunch, who lived the remainder of her life as a seamstress and died in Memphis in 1961, after serving her sentence for a few years.