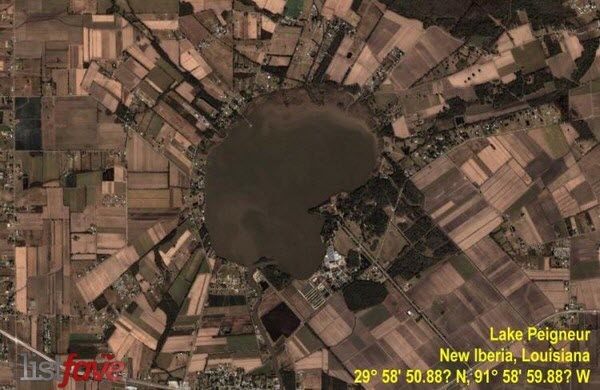 On November 20, 1980, a freak man-made accident occurred in Lake Peigneur when Texaco engineers miscalculated the drilling spot. During an effort to search for petroleum, the drilling effort inadvertently caused the lake to drain to an underground mine.

All the evidence was washed away and destroyed in the disaster, making it difficult to determine the exact cause. As the water drained into the hole, a giant whirlpool sucked 65 acres of the lake edge, bringing with it many trees, eleven barges and even the drilling platform.

A few days later, the lake was refilled with salt water from the Vermillion Bay and the Delcambre Canal, when a 120m geyser burst from the large mineshafts. After the water pressure equalized, locals found that 9 of the 11 missing barges were popped out from the underground mine. None of the Texaco employees died from the accident thanks to well-rehearsed evacuation drill. Local fishermen were also able to drive their boats to the shore and get out before the whirlpool sucked them into the mine.