Allman appeared okay after the crash, and friends and family assumed he would pull through, but he ended up dying in surgery later that night. His organs were crushed in the accident, and the internal injuries were too severe to repair. Coincidentally, Allman Brothers bassist Barry Oakley died in a motorcycle crash near the same location, one year later.

Film actor Gary Busey was known for disagreeing with mandatory motorcycle helmet laws. Busey crashed his bike in December of 1988, ten years after he received an Academy Award nomination for his brilliant performance in The Buddy Holly Story. He was not wearing a helmet and suffered permanent brain injuries.

Gary’s hit his head on the curb after he was thrown from his bike in Malibu, California, and ended up in critical condition. Although Busey eventually recovered and continued his Hollywood career, the accident altered his brain and contributed to the erratic behavior that he is famous for nowadays. 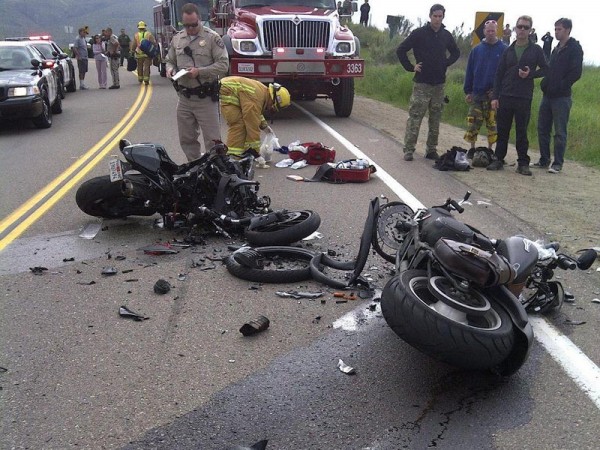 In 1966, musician Bob Dylan was at the height of his career, and considered by many to be the most talented songwriter in history. On July 29th, in Woodstock New York, Dylan skidded on an oil patch and crashed his motorcycle. What happened after this is the subject of heated debate among Dylan fanatics.

Some think the crash was only an excuse for Bob to escape drugs, the critics and the crowds, while others believe that the accident caused serious injury. Either way, Dylan was never the same after his bike went down.

The Academy Award winning historical drama, Lawrence of Arabia, was a true story based on the life of T.E. Lawrence. Thomas Edward Lawrence was a military officer, a diplomat, an archeologist and an author. He played a major role in the Arab revolt and survived a lifetime of service in the army, only to be killed in a heartbreaking motorcycle accident at the age of 46.

Two months after retiring from the military, Lawrence, crashed his bike in 1935 and died six days later. The death of this beloved hero actually inspired the widespread use of motorcycle helmets.

In 2008, professional Canadian ice hockey player Luc Bourdon crashed his motorcycle into a tractor trailer at the age of 21, dying instantly. His tragic death was attributed to his inexperience with motorcycles, as he had only learned to ride the bike one week prior to the accident.

Experts theorize that Bourdon’s lack of experience caused him to lose control of his bike, and his death is a valuable lesson on the importance of being well trained on the road. Because of his young age and his promising career in professional sports, Bourdon’s death was a major blow to friends, family, and hockey enthusiasts.

Bart Costello is the founder of Injury Law. Bart is passionate about helping people. He has built a strong reputation over the last thirty years as one of the premier Boulder personal injury attorneys.