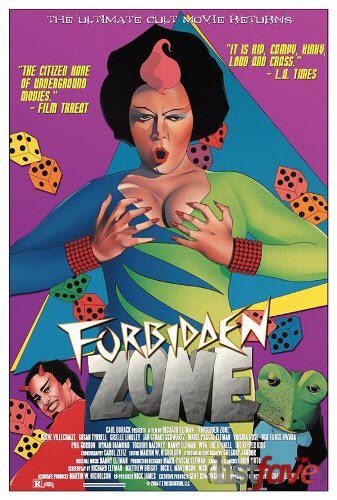 The Forbidden Zone is a bizarre low-budget black and white musical. A family of five lives in a house with a door to the Forbidden Zone (Sixth Dimension). The daughter trips on a roller skate and tumbles through the door into a large intestine before ending up in a bizarre version of Alice’s Wonderland. The dimension is ruled by a dice-based royal family, instead of playing cards. There is an evil Cheshire cat, a living chandelier, a rival queen and even an attractive, topless princess who runs around between scenes. The rest of the family enters the door in an attempt to rescue the daughter. Its film-makers definitely deserve a lot of credit because the wacky concept is sequenced nicely with strange unity.