5 Tips To Improve Your Swing

In the same way that basketball player practicing his shooting mechanics or tennis your drive, golfer should have very defined and trained their swing. It is the movement we do when we execute a coup aimed at achieving maximum distance and more focused direction. The swing is unique in that it is different for each person, because each of us brings a speed and movement to our scrimmage. The swing consists of four parts:

Backswing: the moment that took the club back in order to build momentum and take the hit. The stick is above our heads.

Downswing: here the post redirection occurs. Stops rising and begins to fall up speed before hitting the ball.

Follow through: begins at the moment when the ball is hit and the movement of the arms and the club continues now in a slowdown.

Finish: end of the swing. Our body can no longer turning more and finally stops the stick above our head. 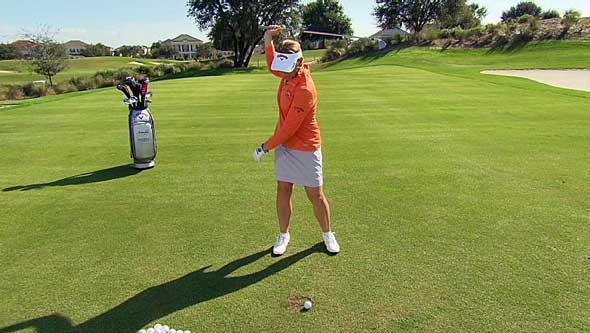 Then we’ll teach you a series of exercises that allow you to further improve your swing and you get a far stronger and beatings:

If you tend to extend your arms away from your body or move excessively clockwise during the backswing, this is a proper exercise to solve these problems. Stand facing a wall, about 10 cm from it. You simulate the situation with your hands gripping the stick and move them back as if you were simulating the first parts of the swing. Then lower your arms carrying an imaginary scrimmage. Repeat this situation 10 or 12 times until you get fluent with this movement and not hit his knuckles on the wall.

Grab your driver inverted form so that the grip is down. By practicing the beating, at the instant that the grip is down you may have to realize that buzz causes with air. Repeat this exercise to catch feelings and the moment in which the bar gets maximum acceleration in order to transfer the most power possible to your beatings.

It consists of taking the stick as if we were right-handed rather than left-handed (left hand on the bottom of the grip and the right at the top) and vice versa. So did our normal swing, as if we were performing it with the correct grip. This exercise will help us to feel the natural movement of turning our arms and get a more natural and straight scrimmage.

4. Exercise With Thumbs Up

We begin this exercise without sticks, making an imaginary blow. We need to check that at the time of the swing where we have horizontal arms are thumbs up. During the backswing should check again that when the arms are horizontal, our thumbs are pointing upwards. Let us do the same exercise, but this time with a stick. The aim is again hitting the ball straight.

5. Practice From A High Lie

In this exercise we will take some balls with a lie (angle between the club shafts with the ground plane) above our feet. Thus what we will hit the ball from a higher position, looking for a hit in the center and properly. So avoid the slice, the effect which causes the ball to move to the right instead of following a straight path during his air phase.

With this series of simple exercises noticeably improve your swing. You will get longer and straighter shots, which will result in a substantial improvement in your game.