Glasgow is Scotland’s largest city and home to not one but several universities, there is the University of Glasgow, the University of Strathclyde which has the only business school in the whole of Scotland, Glasgow Caledonian which the Securities and Investment Institute named a Centre of Excellence and at least four other further or higher education establishments.

Scottish people are said to be the most friendly in Britain and it is widely claimed that the city of Glasgow has a ‘vibe’. I have seen Glasgow described as a smaller, friendlier version of London. The city has plenty of outdoor spaces with 70 parks, two national parks are within a short drive of the city.

Socialising is rumoured to be a students favourite hobby, if you are a student who fits this stereotype you will be extremely happy in Glasgow. The city has 700 bars and more than 130 music events every week. University of Glasgow is located in the city’s west end, right in hub of the action. Many of the city’s most fashionable bars are located in the west end. See this forum post to learn more about the city’s nightlife and music scene. 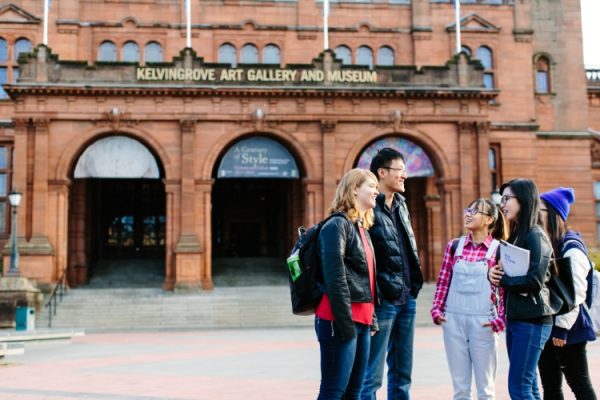 Many Blue chip companies and large organisations are attracted to Glasgow because of its student population and the highly educated local talent that this city offers. J.P. Morgan, Morgan Stanley, Barclays, Three, Capita, IBM and Hewlett Packard are just some of the many organisations who offer employment opportunities within this city.

The cost of living in Glasgow is pretty low when compared to other major U.K cities. I heard lager is popular with students and am sure many will be pleased to know that the average cost of this popular beverage is just £3 a pint in Glasgow, in the South of England a pint is usually £5 or more. The University of Glasgow recommends that a single student budgets £12,100 for yearly living expenses, £400 for books and £300 for travel.

A single student can live more cost effectively in student halls or by co-inhabiting with other students. Should a student wish to live on their own they will find a 1 bedroom flat in the city’s west end, near the university campus and most popular bars to cost around £600 PCM. Cheaper rental properties can be found in the East and South of the city but students who choose to live further away from the campus will incur higher transport costs, transportation is always a factor when looking for a potential home.

2 Mins read
Improving your business outlook is something you should always have on your radar. With that in mind, are there things you could…
Business

4 Mins read
So far, the effects of the novel Coronavirus on the world economies are very concerning. The supply of goods and services in…