The Importance Of Forensic Identification Of Footwear In Investigations

The Forensic Identification of footwear has come a long way in the past twenty-five years.  Over the years, many crime scene investigators have passed up what may have been incriminating evidence simply because they did not know how to properly process and compare it.  Mike Cassidy started the ball rolling in this country to show that footwear were an integral part of crime scene evidence.  Others have advanced the process so that now footwear ‘idents’ are usually more common than fingerprint identifications and can actually be more incriminating, depending of course on the circumstances.  A school janitor usually takes great pride in his floors even though fingerprints remain everywhere in the building.

However, footwear comparisons require considerable training and preparation.  One can easily be ‘fooled’ by class characteristics.  It is certainly an area that requires great care in utilizing the ACE-V process correctly. 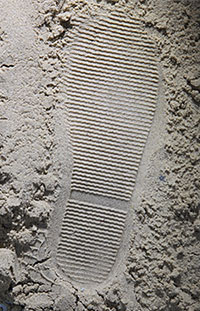 In addition, to ensure the value of the evidence for court purposes, certain protocols must be followed at the scene both for the location, protection, and recording of the evidence.  Any investigator attending a crime scene without a good quality flashlight is not really a crime scene investigator at all.  Even before entry to the scene, he must be observant for footwear and tire tracks outside the building.  With any crime scene, there is one thing that is definite.  The culprit has touched the floor and/or some other surface with his footwear.  Any hard surface such as tile, wood, stone, etc will either receive a deposit from or give up surface material to the footwear.  Even carpets can provide footwear evidence.  I have frequently provided images of runners to investigators that show definite size and shape characteristics.  This alone is sufficient to eliminate possible suspects, something that is most helpful to the investigator when such lists are long.  Usually oblique light from a strong directed light source will make the details of the latent footwear print visible.  The trick then is to enhance it so that it is recordable by the camera.  Today there are numerous methods and each requires training and experience so that it can be used to its advantage.

As a word of caution, one must expect to find footwear on any surface and sometimes in large quantities.  I know of a homicide case that was lost because one very senior forensic identification crime scene investigator felt that it was unnecessary to properly record each and every footwear track in the actual crime scene.  While one must use one’s judgement at normal crime scenes, certainly a homicide or other violent crime scene demands the ultimate effort, knowing full well that every bit of evidence will be thoroughly scrutinized, especially that which could have been overlooked and missed.  Remember that if one is following the principals of ACE-V, one cannot evaluate a piece of scene evidence before it is recorded for later analysis, especially when there is nothing with which to compare it.  And if it is not recorded accurately, there can be no verification of the evaluation, which therefore cancels out the whole effort of processing the crime scene. Using the latest evidence tracking software, which has come a long way, can really improve investigative efforts.

It has been proven time and again in this country that Police investigators are not infallible.  Therefore the verification of physical evidence by peers is an absolute requirement in our justice system.  There is an onus on the crime scene investigator to do a full and complete scene investigation and evidence collection.  Anything less could lead to the erroneous conviction of an innocent suspect.