SCAVENGER HUNT OF 4TH OF JULY

An independence day celebration at home is mainly watching the Philadelphia Parade on television, paying gratitude to the people who laid down their lives fighting for the freedom of the nation. Kids go about the home asking: Why do we celebrate this day? We attained independence from whom?. You answer those two questions, and that is all.

Don’t you wish the kids to know more than just what and whom? Like the atrocities faced by the Americans under the reign of Great Britain. Many historical facts could help your kids understand the importance of cherishing what they have and simultaneously being thankful to the people who made it possible. 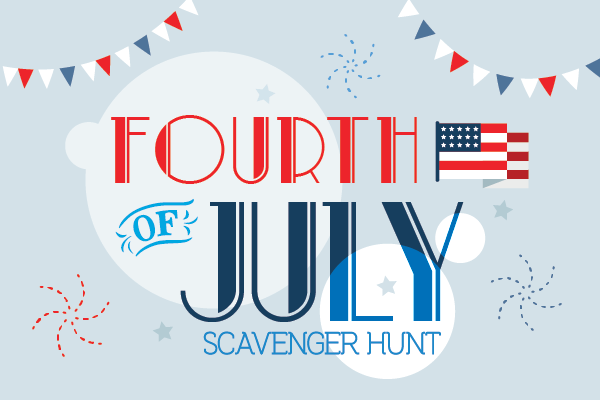 Some of the Interesting Facts being:

Although it’s deemed as a collective effort, it was Thomas Jefferson who contributed heavily to drafting the constitution.

The oldest, continuous Independence Day celebration in the United States is the one at Bristol in Rhode Island, marching since 1875.

Teaching kids the significance of historical events that helped the USA attain freedom can be tiresome, but there are other interactive ways in which you can impart education like a game of independence day scavenging hunt.

Scavenging hunt is an interactive way of teaching kids about the voices that were raised and the subsequent events that occurred that gave way to independence with the help of clues prepared in the order leading up to the occasion.

Independence day information: from history to the monumental day.

Clothes with the red, white and blue pattern

Create a list of all prominent figures who played a significant part in achieving independence in the respective order of the movements they were involved in.

You can either organize an indoor scavenger hunt or an outdoor one where kids and adults can search and collect items after cracking the riddle/clues.

One can start by writing numbers on the paper along with the clue on the other side, which will guide to next clues and so on.

While playing indoors, clues can be hidden in places like kitchen sinks, washroom cabinets, in the wardrobe, under the dining table, on the mirrors, walls, doors. You can also try putting these clue in apparent places since they tend to go unnoticed.

Parents should help their kids with reading and understand the clue references. With adults, you can put some stumping hints that will make them brainstorm and drive with enthusiasm to look for next clue. The one who can solve all the clues in time will get the scavenging hunt treat that could be an apple pie with an American flag on it or a sumptuous hot dog.

Make this fourth of July a riddling and entertaining event along with enlightening them about the magnitude of this day. Also may the fourth be with you!

For more information visit us: RiddleMe