Kochi – A City That Was Ruled By Portuguese, Dutch, and British

The striking port city of Kochi, also known as Cochin, is one of India’s most visited places. It is a backwaters city home to the Port of Kochi, which is one of the largest ports in India. Often called Ernakulam, which is the main commercialized part of the region, it is the second largest city and a chief financial city in the state of Kerala. It is also significant strategically as is the headquarter of Indian Coast Guard and home to Southern Naval Command. Apart from that, it also houses Cochin Stock Exchange, a Cyber City, High Court of Kerala and Lakshadweep, and International Pepper Exchange. It is also one of the places on Indian mainland that were first to welcome European settlers. It was occupied by Portuguese, Dutch, and British with the Portuguese merchants being the first to colonize it, starting from 1503. Nestled in between the mystic Western Ghats at one end and the majestic Arabian Sea on the other Cochin is also noted for its natural wealth. It is without doubt one of the most beautiful places in India. The enchanting backwaters flowing through the city in particular are the prominent allures putting the city at par from other port cities in India. Relishing a tranquil and scenic boat ride in the backwaters of the place is a must-do. Besides, there are number of boathouses offering excellent lodging facilities that the tourists can avail.

Today, Cochin is visited by thousands of backpackers every year. There are numerous bewitching attractions luring travelers from all over India to the city. While you explore and discover the city, the significant places to visit in Cochin that you are bound to check-out include:

Fort Kochi and Chinese Fishing Nets – Home to the revered St. Francis Church, which is the first European church on Indian soil, Fort Kochi is one of the most popular tourist sites in south India. A casual stroll through the old narrow streets or at the serene beach will simply get you refreshed. The unique architecture of the buildings and the town exhibit the best of European style of architecture on Indian soil. It is also perhaps the only place in the world where apart from China the large Chinese fishing nets are still used. If you are a history buff this is the place that want to visit. 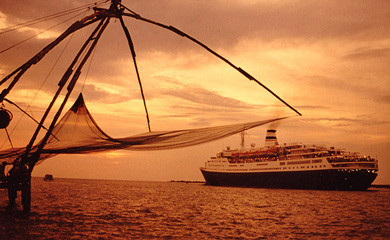 Pareekshith Thampuran Museum – Located close to the city centre, it is an ideal place to learn more about the checkered history of Cochin. It boasts of an impressive collection of 19th century artifacts and relics. There are paintings, stone scriptures, old coins, murals, monuments of historical significance, and a memorabilia on the Cochin royal family. Tourists visiting the museum also visit the Lord Shiva Temple situated in the vicinity.

Willingdon Island – It is a beautiful island, an artificial island created with the sand that was dug out while Kochi Port was getting more deep. Today it houses the modern port which serves the city. It is a major tourist haunt as it houses numerous entertainment and rejuvenation centres including some of the best Kochi hotels.

Dimpy Roy is a travel writer working with an Online Travel Guide. She guides travelers about Athirappilly Falls and choose the best one.