A Brief History Of The American Civil War 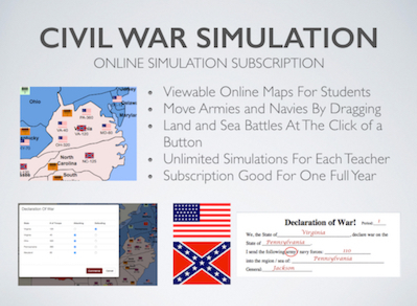 When it comes to the simulation of civil war the students are a lot more interested and involved. This activity-based learning is even recommended by some leading psychologists.

The simulation of civil war is of two types

The students are given an introduction to the reasons that led to American Civil War. They are then divided into two groups. One group supports the owning of slaves and the other opposing. The first group becomes the southerners who form the Confederate States of America breaking away from the Federal. The second group becomes the northerners.

The important events are acted out by these two groups. After the simulation, the students are given a handout and write down their opinions about the history of civil war. After this, a de-briefing is conducted to understand how well the students have understood the subject.

Civil War simulation game begins with the election of 1860.  Students take up the role of individual states and vote for the election as per the prevailing political views of the particular state. During this gameplay, the students face challenges and advantages of North and South as it was in those times.

The lesson flowchart, simulation rules, and instructions are given to students before beginning the game. When the election simulation begins students tend to become involved with the states they represent emotionally and become competitive to achieve their objectives.

Objectives achieved through this Game Play

Some of the important points that Students learn and understand are

More and more schools are realizing the benefits of these simulations and integrating it into their curriculum.

The brief history of American Civil War can be effectively taught to the students through civil war simulation. It helps them understand better as they get emotionally involved and to be more competitive in the simulation they take keen interest to learn in detail all about the civil war.