7 Things To Consider When Feeding A Pony

There are things to consider before we feed a pony:

Pony should get enough energy to meet its daily requirements. It needs more energy if we use it more actively or the weather is colder. We should know when we need to increase the amount of food accordingly. During the summer, the pony could become less active, so we could probably reduce the overall food intake.

Aside from its usual energy intake, we need to make sure that the pony feeds contains enough vitamins and minerals.

Like the rest of the equine family, pony’s digestive system is designed to process grass with its high bulk and fiber content. Grain and other nutrient-packed food may provide more minerals and vitamins, but the pony’s digestive system also needs enough amount of bulk. Without enough bulk, there could be a greater risk of diseases, like ulcer. According to researches, horses that only concentrated foods, like grain are far more likely to have ulcer. 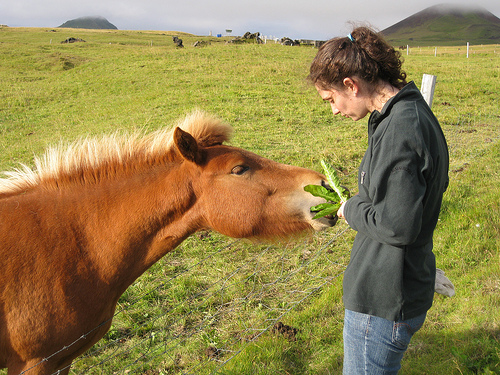 Poorly digested food could cause serious health problems, like the impaction colic. It could be a problem for older ponies with dental wear. These ponies would have reduced ability to properly chew their food. Additionally, ponies could eat less than suitable food like straw, which have very low nutritional value.

It is important to provide food in correct fashion and quantity. Without proper feeding procedure, health issues could be a problem. First of all, we should have an idea on the normal eating pattern of our ponies; each could have slightly different habits. Ponies are originally foragers and it means, they are likely to eat a little in one place and then move to other areas. Ponies regularly move to areas with more tender and nutritious blades of grass. We should be able to see this kind of habit when we release horses or ponies in a large plain. Because good grass isn’t always readily available in the area, ponies could spend much of their time eating and moving.

It is clear that ponies need to eat frequently with at least 3 large meals to keep their digestive system healthy. In general, it is better for ponies to have many small meals than a few larger ones. Often, ponies that graze on a pasture have better health conditions that ponies that get food only twice day in their cages.

Ponies need to get stimulated to eat properly. Restricting our ponies to infrequent and short feedings with random schedules could make them unhappy and bores. This could result in stress-related patterns such as repetitive movements or cribbing.

While we could feed our horses with some amount of grain and other nutrient-rich food, grass is still our pony’s most natural food. Ponies can be the healthiest if its main diet is consisted of high-quality grass. Hay is considered as a lesser food for ponies and could be given during the winter, when fresh grass isn’t available.