Microsoft finally unveiled the new Surface 3 that has vowed to challenge all the leading tablet computers in the market today. The tablet’s size becomes smaller, The price becomes cheaper. Although the Surface is a tablet, but as the main office products, brand, Here let us look at the parameters between Surface 3 launch of the new year, and Apple MacBook Air.

The new Surface 3 is 3 percent shorter and 11 percent narrower than the 11-in MacBook Air. 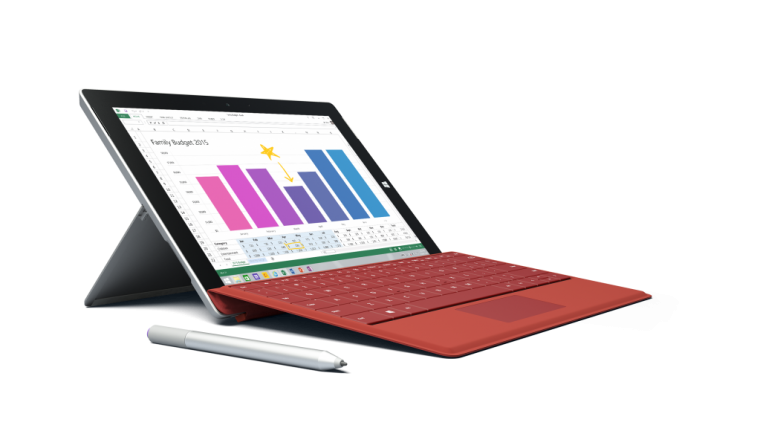 Comes to the body material Surface 3 already made of magnesium alloy, But also continue to follow MacBook Air aluminum alloy. And TrackPad In this regard, MacBook Air (MBA) absolute wins Surface 3, which uses a glass material, The Surface 3 using a plastic material.

No choices here, as both devices ship in silver color only, And Surface 3 available display size is 10.8 inches and MacBook Air offers a 11.6 inch display and coming to the resolution of the screen 1920×1240 214ppi with surfacepro3 and MacBook Air equipped with 1336×768 135ppi.

Surface 3 uses the Intel Atom processor, an Intel Atom x7 processor that runs at 1.6 GHz and provides a Turbo Boost speed of up to 2.4 GHz. Its horsepower, however, is going to lag behind that of the MacBook Air’s Core i5. And Ram Surface 3 has raised to the highest RAM 4GB, Entry level to 2GB. MBA is the basis for models with 4GB RAM configuration, 8GB RAM also offers another choice.

Users can pay extra $ 100 you can buy support 4G LTE of Surface 3, MBA product line has yet to support cellular data versions appear. Microsoft has not announced Surface 3 battery capacity, which only revealed the device can support more than 10 hours of video playback. MBA is able to support more than 9 hours of Wi-Fi use.

Surface 3 has Equipped two cameras (3.5 MP front and 8 MP rear), With most of the pixels in the horizontal flat. As a notebook, MBA only equipped with a 720p camera. Surface 3 only supports Mini Display Port, and MBA can simultaneously support Mini Display Port and Thunderbolt. MacBook Air has two USB 3.0 ports, while the Surface has only one.

Surface 3 runs with Windows 8.1, The future users will be a free upgrade Windows 10. MBA runs with OS X Yosemite.

Surface 3 is scheduled for  May 15 sale, MacBook Air already on sale from March 15. No stylus version priced at $ 630 Surface 3, If coupled with the stylus (cover+pen), you need to pay additional $ 50. MacBook starting price of $ 900.