Metallic covering is used on electronics and other functioning equipments, where the metal like copper or nickel are sprayed and then dried. The shield is made extremely dense so that there is no possibility left for any voids or meshes. This is because the wavelength of the incident electromagnetic waves is very small and if the passage is greater than these wavelengths then they can pass right through them. So considering the wavelength of these waves, proper layout is made sure to avoid any such possibilities. The dried metal provides protective, conductive layer to the equipment and can directly be connected to the ground channel of the assembly. The alloys that have very high magnetic permeability are most effective when used to shield all the varying magnetic fields with the range of frequency 100000 Hz or below them. Permeability is the most important factor in these applications when electromagnetic shielding is required. Hence materials are chosen and graded with this reference. While achieving superconductivity at extremely low temperatures to attain highest flow of current, we can also expel the magnetic field out of the conductor. This effect is called the Meissner effect which has been introduced during the transitioning period of a metal from normal temperature state to superconductivity state. 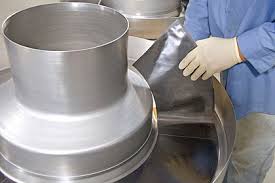 As electromagnetic radiation is the combination of electric and magnetic fields, which is when incident on the surface of an ideal conductor its electric characteristic induces a current that causes displacement of charge in the conductor that cancels the applied field inside, at which point current stops. Eddy current is also involved to cancel the applied magnetic field which is generated by the variation in the magnetic fields. A static magnetic field is not responded by the conductor unless the conductor and magnetic field are moving relatively. As a result these electromagnetic radiations are reflected by the surface of conductor by making inner felids and outer fields alienated. Radio Frequency shields have the strong capability to block various ranges of frequencies in various operational conditions. Copper has the ability to strongly absorb the entire radio waves incident on them from any source. It has even same tendency in absorbing magnetic waves too. Due to such tremendous feature copper is preferred mostly in Electromagnetic shielding over many other materials. There are other metals with comparative features but copper stands out considering the cost efficiency too.

There are so many factors that limit the shielding capability of various Electromagnetic Shields. They tend to influence the performance affectively hence optimization becomes the need to achieve the best outcome. Electrical resistance present in the conduction material defies to some extent the impact of the excited field resulting in the leakage while shielding process. The conductors which possess ferromagnetic characteristics tend to resist the attenuation and hence the magnetic field doesn’t get fully attenuated. The shield containing holes are unable to excite the sufficient electromagnetic field to cancel the effect of the incident field.