Spectacular landscapes, unique buildings, mild climate, a high standard of living and security – this is what Vancouver usually remembers to visitors of the city. Vancouver is the third largest city in Canada, located in the southwestern part of the country in the province of British Columbia.

No matter from which side you look at Vancouver, you feel a special unity of the city with nature. On one side, it is gently embraced by the sea, and on the other – majestically underpinned by the mountains. The city is full of numerous parks, squares and other green places, where raccoons, skunks, squirrels, beavers, geese, ducks and swans still dwell with pleasure. This neighborship of civilization with wildlife only emphasizes Vancouver’s particular sensitivity to the environment. It is not surprising that one of the largest organizations for the protection of the environment, ‘Greenpeace’, was born in Vancouver. For the constant contribution to the development of clean and environmentally friendly technologies, Vancouver is already one of the most “green” cities in the world and intends to head this list by 2020.

The numerous picturesque city parks amaze by their purity and naturalness. The largest park, Stanley Park, occupies a bit more than 4 square kilometers in the very city center. There are national museums of different cultures in Vancouver. One of the examples is the park museum in Chinatown, which can tell about the traditions and life of the Chinese people. Using car rental in Vancouver International Airport, you can reach countless remarkable places, among which are beautiful, various bridges.

In total, there are twenty bridges in Vancouver, two of them are chain draw- these are Granville Street Bridge and Burrard Street Bridge. In markets, located near the Granville Bridge, you can purchase various seafood and delicacies. In the eastern part of the city, there is one more famous bridge, which is called ‘the Ironworkers Memorial Bridge’. It connects the banks of Burrard Inlet.

Two most famous Vancouver bridges are described below.

Holiday in Vancouver usually begins with the Capilano pedestrian suspension bridge. It was constructed in 1889, by a project engineer from Scotland, George Grant Mackay. In 1889, the bridge looked completely different: built from hemp rope and cedar boards, it quickly fell into disrepair and was completely rebuilt in 1956. The length of the bridge is 137 meters. It is hanging above the river Capilano on the 70 meters’ height.

When you are looking down from the bridge, dizziness is guaranteed. Each year, more than 800,000 tourists test themselves and the bridge for durability. However, the residents of Vancouver try to avoid the bridge, believing that it is only entertainment for tourists. It may seem strangely enough, but the Capilano Bridge is not a public territory, but a private domain. Today it belongs to the company owned by Nancy Stibbard. This woman owns the bridge, and she has all the rights of it.

This Suspension Bridge is one of the most popular attractions of British Columbia. It was constructed for the sawmill workers, but in the middle of the XX century, a complete reconstruction of the structure was carried out, and Capilano Bridge became a tourist attraction.

An extreme walk over the canyon is a test not only in courage, but also in composure. The path of 137 meters along a bridge that is waving, because of the wind, is unlikely to seem an idle pleasure, but this is the best way to see the tops of firs at eye level. Particularly impressionable people are not recommended to look down, where the streams of the Capilano River are rising in waves. However, there is nothing to be afraid of- the steel cables of the bridge can stand a weight of 90 tons. It means that at the same time there may be more than a thousand people here.

The river Capilano and the bridge received their names on behalf of the leader of the Indian Suquamish tribe, once inhabited in the territory of modern Vancouver. In memory of him at the entrance to the bridge, there are totem poles with the depiction of animals and the mythical soul of the Suquamish tribe.

On the territory of Capilano Suspension Bridge Park, there are cafes and restaurants, souvenir shops for tourists and observation platforms, built at a small distance from the river. In addition, tourists can stroll along seven suspension bridges, laid through forests at an altitude of thirty meters, watching the squirrels jumping on the branches of trees. Another attraction of the park is the Cliffwal tracks, laid along rocky ledges.

Annually, from early December to early January, the park hosts ‘Canyon Lights’ light and music shows. The beginning of the performances is at 16:00 daily.

It crosses the strait of the Burrard Inlet and connects Vancouver with its northern municipalities. The length of the main span of the structure is 473 meters, the height of the tower is 111 meters. The capacity of the suspension bridge is quite large. The total length of the bridge, including the overpass on the north side, is 1,823 meters. Due to the fact that the bridge has a considerable height, container ships and deep-sea cruise ships easily pass under its arches. 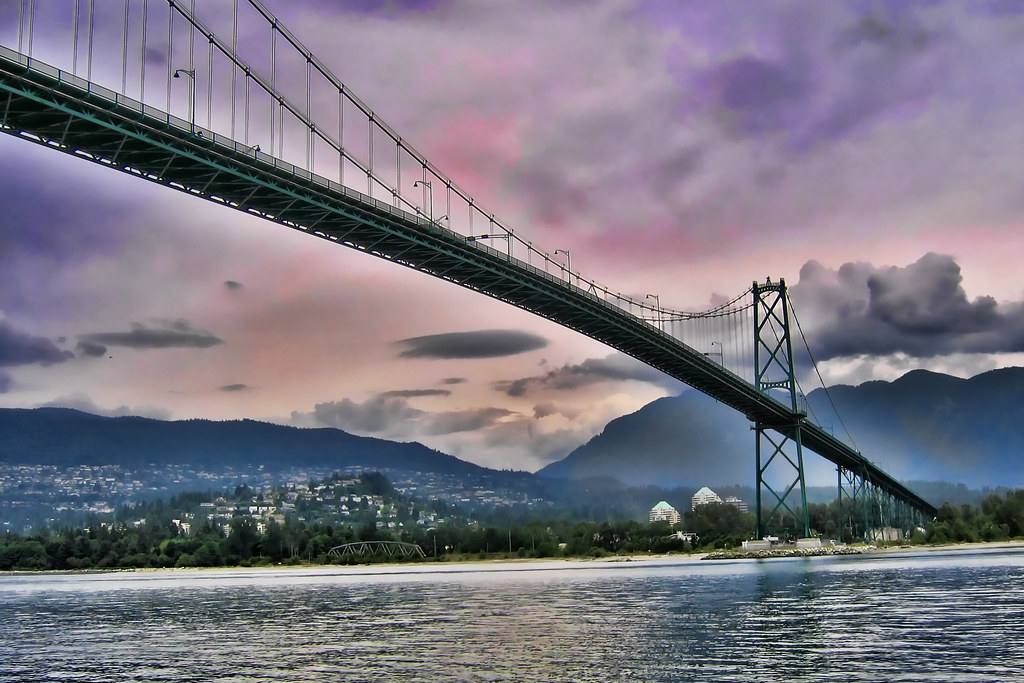 The space for sea vessels between the lower edge of the bridge and the surface of the water is 61 m. About 60-70 thousand vehicles, weighing up to 13 tons, daily pass through the bridge.

Directly along the line of the bridge are the high mountains, called ‘the Lions’. At the entrance to the bridge, there are also concrete figures of lions. It is the work of the sculptor Charles Marega.

Not so long ago, the bridge, which is a symbol of the city, was reconstructed and expanded, increasing its reliability. In 2005, “Lions Gate” was included in the Canadian list of places of historical value. The official opening of the bridge, in which King George VI and Queen Elizabeth took part, was held on May 29, 1939.

The name of the bridge contains a reference to the two peaks of the nearby mountain ridge North Shore, which are called ‘Lions’. These peaks, at the foot of which the bridge is located, is one of the most recognizable sights of Vancouver.