Moto G4 Plus Vs Moto G4 – What’s The Difference?

Motorola introduced the first-gen Moto G budget smartphone in 2013, which was aimed towards the consumers in the emerging markets. After six months of launch, the Moto G became the company’s bestselling smartphone ever. After the tremendous success of the Moto G 1st-gen in India, Mexico and Brazil, Motorola unveiled the Moto G 2nd-gen and 3rd-gen models in 2014 and 2015 respectively. Similar to the first-gen Moto G, the 2nd-gen and 3rd-gen models have also been among the vendor’s bestselling smartphones. Now the brand has introduced the Moto G 4th-gen models – the Moto G4 and Moto G4 Plus. Given the popularity of the Moto G series in India, the company has first launched the new Moto G4 range in the country.

The Moto G4 Plus is a slightly upgraded variant of the Moto G4. If you are confused over purchasing the Moto G4 and G4 Plus, let’s put the phones on the table for a comparison, so you can decide which one better fulfills your needs. 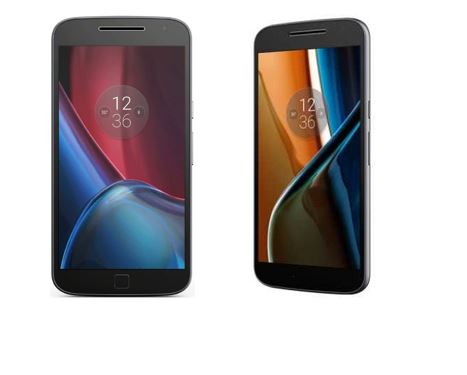 Moto G4 Plus vs Moto G4 – comparison of the budget smartphones

The Moto G 4th-gen smartphones are remarkably slimmer than the 3rd-gen models. They sport a slightly different design their predecessors with metal frames around the edges. They measure 7.9mm around the waist, as compared to the 11.6mm thickness of the third-gen Moto G. The new phones offer splash-proof coatings, but ditch the waterproof design found on their predecessors. The Moto G4 Plus also packs in a fingerprint sensor integrated into the home button, which is missing on the Moto G4. Overall, design-wise, there’s isn’t much difference between the Moto G4 and G4 Plus, apart from the fingerprint sensor of the latter.

The Moto G4 and Moto G4 Plus, both the smartphones come with similar screen sizes. They offer 5.5-inch full HD IPS displays with a layer of Corning’s Gorilla Glass 3 to keep the everyday scratches at bay. The phones deliver an immersive media viewing experience thanks to high pixel density of 401 pixels per inch. Software-wise, both the phones run Android 6.0 Marshmallow out of the box. They offer Moto Pure software on top, which offers some other software tweaks like swipe to dismiss, swipe to unlock and pick up to stop ringing. So there’s no difference in the display and software segment of the new Moto G phones.

Moving on to the configuration, the Moto G4 and Moto G4 Plus, both the smartphones are powered by 1.5GHz octa-core Qualcomm Snapdragon 617 processors, coupled with 2-gigs of RAM and Adreno 405 graphics processors. There’s also a slightly more powerful variant of the Moto G4 Plus that comes with 3-gigs of RAM. For storage, they both offer 16GB of internal memory, further expandable up to 128GB via microSD cards. The Moto G4 Plus is also available in an additional model that sports 32-gigs of internal memory. So, as you can see the base models of the Moto G4 and Moto G4 Plus, both the phones offer similar configuration and performance.

Coming to the camera specs, the Moto G4 sports a 13-meg primary snapper with a dual-LED flash, f/2.0 aperture, slow-mo video, full HD video recording, auto HDR and Quick Capture. The Moto G4 Plus on the other hand offers better camera features as it boasts a 16-megapixel rear shooter with laser autofocus, phase detection autofocus, f/2.0 aperture, a dual-LED flash, 1080p recording, and slow-mo videos. As for the selfies and video calling, they both offer 5-megapixel secondary snappers with wide-angle lens, f/2.2 aperture and Display Flash. So it’s quite clear that when it comes to the selfies, they both offer similar experience, but the primary snapper of the Moto G4 Plus is much better than the G4.

In terms of connectivity features, the Moto G4 and Moto G4 Plus, both the phones offer similar options. They offer dual-SIM slots, 4G LTE support, Wi-Fi, Wi-Fi Hotspot, Bluetooth, A-GPS, VoLTE and NFC support as well. They both are powered by 3,000mAh batteries. They support TurboPower charging, which delivers up to six hours of power in just 15 minutes of charging.

Coming to the verdict, as you can see from the comparison, the Moto G4 and Moto G4 Plus smartphones share quite a few specs. They come with high-res 5.5-inch full HD displays, powerful octa-core processors, decent amount of internal memory, a beefy battery with fast charging support, wide-angle selfie snappers, latest connectivity options, latest software and premium designs with metal frames. However, the Moto G4 Plus packs in a few enhanced specs including a fingerprint sensor, more powerful variants and better primary camera with laser autofocus and PDAF as compared to the Moto G4. As for the pricing the Moto G4 Plus 2GB RAM + 16GB ROM edition is being offered for Rs 13,499, while the higher-specced model with 3GB RAM and 32GB storage is available for Rs 14,999. The Moto G4 on the other hand will go on sale next month, and its price is expected to be in the sub-Rs 12,000 range. So, which one of the new Moto G smartphones have caught your attention? Share your choice in the comments with all.