Moradabad, a city in Uttar Pradesh is a major handicraft city of India. The city is fondly called as Peetal Nagri or Brass City and is the leading producer and exporter of brass made handicrafts. The handicraft industry of the city alone accounts for above 40 percent of total handicrafts exported from India, making the city a significant centre of commerce and trade in central India.

Located about 167 k.m. from the nation’s capital Moradabad is a city and a municipal corporation falling under the Moradabad district. It is about 344 k.m. from Lucknow, the capital city of the state and is situated on the banks of river Ramganga. The city is the divisional headquarter of Northern Railway of Indian Railways. Plus, it is also a quickly emerging centre of education. Other than traders and students, tourists are the third category of visitors that flock the city in huge counts. The old monumental places, Jama Masjid, Pataleshwar Temple, and the long tradition of art, culture, and music attract large number of tourists every year. The good thing is that the Moradabad hotels list is filled with numerous good hotels that will simply make your trip a memorable one. 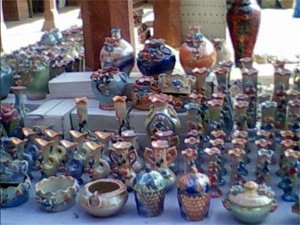 The city served the Panchala, Gupta, Nanda, Maukharis, and Maurya kings and rulers during the medieval era until 1624 when Rustam Khan, then Governor of Sambhal captured the city and named it Rustam Nagar. Later, in the early 1700 the city became a part of the Rohilkhand State province and was finally renamed Moradabad after Prince Murad Bux, son of Mughal Emperor Shahjahan. The Jama Masjid of Moradabad was built on the orders of Rustam Khan, which is a token of respect to the Mughal Emperor. The masjid is a must visit when in the city. Plus, there are other revered temples and shrines that are worth visiting. The multiple Mughal monuments, in particular are the mute testimony to the glorious past of the city. The Najibudaulah’s Fort, Jama Masjid, Chanausi, and Mandawar Ka Mahal are some of the most notable Mughal monuments that are worth checking.  The other popular places to visit in Moradabad include: Sai temple, Vidur Kuti, Sita temple, Raza Library, Kanva Ashram, Lord Shani temple, Kunj Bihari temple, Brahma Dev Ji temple, Shri Parshvanath Digambar Jain Mandir, Prem Wonderland, and Rambagh Dham.

The best time for a tour of the city is during winters. Especially the months between October and December, and February and March are the most preferred time for Moradabad tour. Summers are hot and dry, they are best avoided. The good things is that accessing the city is quite easy. The city is well-connected to Delhi which houses the nearest major international airport and domestic airport. Moradabad also houses a small airport of its own. Besides, the Moradabad railway station is a major railhead in central-northern railway network of Indian Railways. The station is served by frequent trains, connecting the city to all major Indian cities. Those who seek conveniences of connectivity the hotels near Moradabad railway station are the ideal options to pick from. Plus, there are multiple good hotels in the city’s commerce centre.

Dimpy Roy is a travel writer working with an Online Travel Guide. She guides travelers to various resources where they can find best hotels near Moradabad railway station and choose the best one.

Unique Experiences to Enjoy When Staying at Taj Krishna

3 Mins read
Hyderabad, a city steeped in history, is also a bustling commercial hub. Filled with some of the most exquisite architecture, Hyderabad is…