Has Apple Won The Smartphone War?

If you’ve been anywhere near a tech news source in the last several months, you are likely aware of the success of the iPhone 6. The fall launch of the iPhone 6 represented Apple’s perceived return to dominance in the smartphone market, and the sales have supported that perception. Apple reports that sales of the iPhone 6 and 6Plus have led to record-breaking revenue for the latest quarter. It was obvious on the heels of that success that Samsung would need to make waves with its release of the Galaxy S6 to stay relevant and convince people to buy its latest smartphone offering. Apple had clearly won the battle, but the war appears to be ongoing.

Here’s a comparison of the two smartphones. You’ll have to decide which device is right for you while the market will determine the overall winner.

From an aesthetic perspective, it seems pretty clear that the Galaxy S6 has taken steps towards mimicking the iPhone’s appearance and provided fewer design choices to differentiate the two phones. The cheap feel of the plastic backing in previous Galaxy models has been replaced with a sleek metal casing and edge, as well as a glass backing. The whole design is more substantial feeling despite being impossibly thin and lightweight.

The Galaxy S6 has little to no bezel and looks amazing. The iPhone 6’s design is no less of a stunner. The beautiful, sleek design and appearance of Apple’s latest offering makes it stand out, and the obvious mimicry from the Galaxy S6, is a testament to that fact. Either phone is a solid design choice. The miniscule differences in thickness and weight offer no perceived difference. The iPhone 6 is 6.9 mm thick and weighs a mere 129g. It sports aluminum backing and comes in grey, silver and gold. The Galaxy S6 is 6.9 mm, weighs just 138g, has an aluminum unibody design with a glass panel and is offered in white, black, gold and blue. 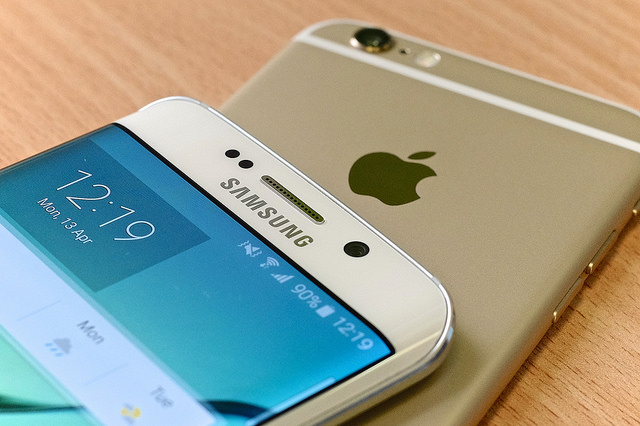 The build quality of both devices is top of the line. Samsung has adopted the new metal casing with a Gorilla Glass display for the S6. Discounting the brief flurry over bending concerns when the iPhone 6 rolled out, Apple has clearly presented a smartphone worth copying. First impressions lead you to believe that Samsung agrees.

Both phones are sturdy and virtually seamless. Both phones also represent a previously unmet build quality, managing to feel both substantial and solid, while simultaneously being impossibly thin and light.

Although the iPhone 6 screen size has increased to 4.7 inches, the Galaxy S6 still offers more touchscreen real estate with a 5.1-inch display. It may be hard for users to differentiate between Apple’s 1334 x 750 pixel LCD screen and that of the Galaxy S6’s “2K” Super AMOLED display. But the Galaxy S6 does take the cake in terms of pure display performance. And the OLED technology provides more definitive black levels and impressive contrast. Both phones offer crisp, beautiful displays viewable at many angles.

The iPhone 6 has an A8, 64-bit dual-core, 1.4GHz processor and 1 GB of RAM. The Galaxy S6, by comparison, has an Exynos 7420 64-bit octa-core processor with 3 GB of RAM. The additional RAM provides the Galaxy S6 with a perceived advantage, but actual performance tests have proven the speed gap to be minimal. Both phones are very fast in terms of performance. The IOS software on the iPhone 6 is where Apple beats the Galaxy S6 and its Android OS. Proprietary software will almost always beat out a customizable, shared OS like Androids, especially when that proprietary software is developed by Apple.

Smartphone photographers will likely applaud Apple’s improved camera performance despite maintaining the same 8-megapixel resolution. The sensor, lens and stabilization upgrades certainly level the playing field, but the Galaxy S6 still edges (no pun intended) the iPhone in terms of its camera. The Galaxy S6 has also improved its stabilization technology, and it retained the 16-megapixel camera. We’d give a slight edge to the Galaxy S6 in terms of the camera.

When it come to price, the Apple 16GB iPhone 6 retails for $999 without a contract but is available at online retailers such as GiffGaff, Hi-Mobile or Unique Mobiles for a discounted price. The Galaxy S6 starts at $799 for its 32GB model.

The Galaxy S6 is a highly competitive alternative to the iPhone and it even edges Apple in certain aspects, but the overall experience, brand perception, and loyalty are the real differentiators in this crowded market. Samsung has presented consumers with a decided upgrade to its Galaxy phone series with the S6, but the overwhelming success of the iPhone 6 has many wondering if the Korean tech giant has done enough to hold market share. Early sales figures for the Galaxy S6 indicate they may not have done enough, and the war may, in fact, be over.